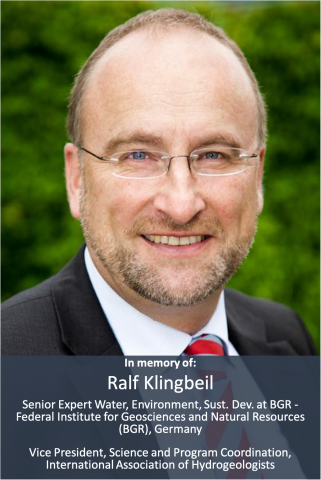 Ralf has been one of the driving forces behind this Groundwater Quality initiative and will truly be missed by the entire groundwater community. Below, the in memoriam written for Ralf, by the International Association of Hydrogeologists.

By: International Association of Hydrogeologists (IAH)

"It is with profound sadness that we report the sudden passing of Dr. Ralf Klingbeil. On behalf of all members of the International Association of Hydrogeologists, we wish to express our condolences to his family, friends and colleagues. We join in this with Ralf’s many colleagues and friends throughout the international community who have been paying tribute to Ralf.

Ralf was particularly well-known for his international work. He presented himself as, “a global citizen and German national with many years of work experience in the Middle East and Europe and Africa.” He was committed to many international activities. This included his roles in integrated water resources management with the UN Economic and Social Commission for Western Asia, in Lebanon, and his global groundwater policy role at the German Federal Ministry of Economic Cooperation and Development, focusing on Africa and the Middle East. He was Network Coordinator for AWARENET, the Arab Integrated Water Resources Management Network for capacity development in sustainable water management. In his personal capacity, he served as a member of the Board of Directors for the Middle East North Africa Network of Water Centres of Excellence.

Ralf’s enthusiasm as IAH Vice President for Science and Programme had begun to infuse the work of the IAH Executive Committee, energizing those he worked with. His aims were to strive, with colleagues, to enhance the role of IAH and the visibility of groundwater in international policy-making. He believed that IAH together with its partners could play a major role at national and international levels. He also recognized how current global challenges show the need for new approaches to international co-operation in the field of groundwater.

Ralf supported and inspired many during his lifetime. We share many humorous and heart-warming memories about his presence with us and our aim will be to learn from all that Ralf did and represented and to build on his legacy.

Our thoughts and condolences are foremost with his family."